Wettest UK Summer in a Century

The UK Met Office reports that Summer 2012 is likely to be the wettest since 1912 and the second wettest on record:

Figures up to the 29 August show that 366.8 mm of rain fell across the UK. It is not expected that rainfall this summer will exceed the 384.4 mm of rain seen in the summer of 1912, which is the wettest.

These latest figures follow a record wet April, and an April to June period that was also the wettest recorded in the UK.

August 2012 looks set to be the driest and sunniest of the three summer months across the UK with 105.5 mm of rain to the 29 August and 140 hours of sunshine up to 28 August. The mean temperature for August was 15.7 °C, in a month that also saw the hottest day of the year so far, reaching 32.4 °C at Cavendish, Suffolk on the 18th.

Unsettled weather has never been far from the UK during the past three months. Movements in the track of the jet stream, a narrow band of fast flowing westerly winds high in the atmosphere, have contributed to the weather we have seen. This summer has seen periods of heavy and prolonged rain, as well as short but exceptionally heavy thundery downpours and only brief warm sunny spells.

Posted by Steve Scolnik at 1:05 PM No comments: 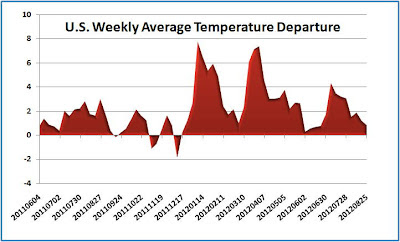 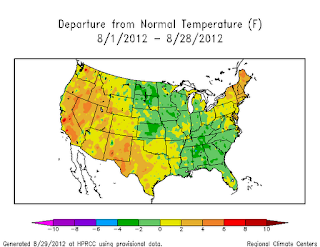 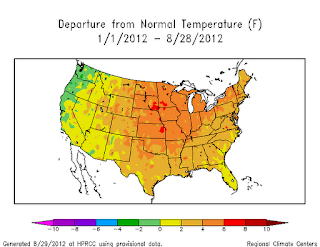 The record warm year of 2012 continued through the 37th consecutive week of above-average temperatures in the U.S., according to preliminary analysis from the National Climatic Data Center for August 19-25. The national average of 0.8° above normal was down slightly from 1.2° the previous week. The month-to-date average was 1.3° warmer than normal with one week left in August. Once again, only 3 of the 9 regions were cooler than average (East North-Central, Central, and Southeast).

Given the remarkable week-to-week consistency of the warm temperatures, it's not surprising that nearly the entire country is averaging above normal for the year to date. Only the Pacific Northwest and parts of northern California have been cooler than average in the interval from January 1 through today.

Posted by Steve Scolnik at 5:03 PM No comments: