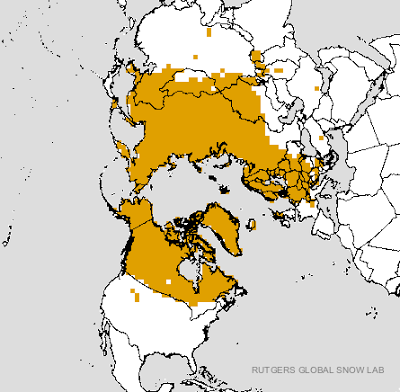 December 10 Update: The streak continues at Milwaukee, where no precipitation is forecast before Saturday. It also continues at Chicago, Omaha, Lincoln.

December 9 Update:
The Omaha snowless streak has continued through today, bringing the new record to 289 days, 5 beyond the old record.

The Lincoln streak has also extended through today, reaching 300 days.

The Norfolk NE streak ended on December 7 (Friday) with 0.5", missing the record.

Milwaukee has had no snow so far today, which will break the record if it extends to midnight. With the temperature of 37° and light drizzle at 7 pm CST, that seems likely.

The Des Moines record streak ended today at 279 days with 1.4" of snow.

Chicago has received no measurable snow so far today, so it's likely that the record will at least be tied.

Original Post:
The record warmest year to date in U.S. climate history and the ongoing Midwest drought have combined to produce record longest snowless streaks at several locations. The image above from the Rutgers Global Snow Lab (click to enlarge) shows virtually no snow cover in North America south of the Canadian border with the U.S. as of yesterday, December 6.

From the National Weather Service:

Omaha last recorded measurable snowfall on February 24, 2012, with 0.2 inches. The streak of 284 days since that date is tied for the longest snow-free streak on record at Omaha as of December 4, and the streak will be extended at least for the next couple of days. The previous record of 284 days ended on December 30, 2006, which was the latest date of the first measurable snow on record in Omaha. Snowfall records in Omaha go back to the winter of 1884-85, with two missing years (1996-97 and 1997-98).

Lincoln last recorded measurable snowfall on February 13, 2012, with 1.1 inches. The streak of 295 days since that date is tied for the longest snow-free streak on record at Lincoln as of December 4, and the streak will be extended at least for the next couple of days. The previous record of 295 days ended on November 27, 2004. Snowfall records in Lincoln go back to the winter of 1948-49, with one missing year (1996-97).

Norfolk last recorded measurable snowfall on February 24, 2012, with 1.0 inches. The streak of 284 days since that date is the third longest snow-free streak on record at Norfolk as of December 4, and the streak will be extended at least for the next couple of days. The record of 298 days ended on January 13, 2007, which was the latest date of the first measurable snow on record in Norfolk. Partial snowfall records in Norfolk go back to the winter of 1893-94, with complete records beginning in 1946-47.

In Milwaukee, Wisconsin, today will tie the record for second longest streak. If it lasts through Sunday, it will break the record:

As of Thursday, December 6th, Milwaukee has gone 277 days since the last day with measurable snow, which is the 3rd longest streak on record. The last time Milwaukee had measurable snow was on March 4, 2012, when 0.9 inches was measured.

Milwaukee will be able to add more days to the streak, since there are only small chances of snow this weekend, with better chances for rain, given the mild temperatures that are forecast.

If Milwaukee makes it through today, with no measurable snow, that will tie for the second longest streak on record (278 days, set in 1908).

If Milwaukee makes it through Saturday, December 8th, with no measurable snow, that will tie for the longest streak on record (279 days, set in 1999).

Finally, if Milwaukee makes it through Sunday, December 9th, with no measurable snow, that will establish the longest streak on record.

On Tuesday, December 4, the NWS at Des Moines, Iowa, tweeted:

Des Moines current streak of no measurable snowfall is at 274 days.The record is 277 days in 1889. #iawx #iowaweather

With no snow though today, the record will be broken.

Posted by Steve Scolnik at 4:59 PM No comments: 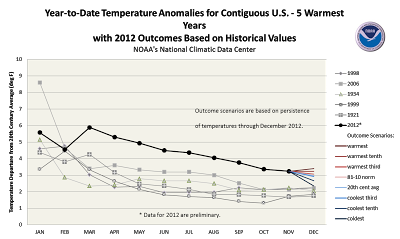 Posted by Steve Scolnik at 2:24 PM No comments:

The high temperature of 71° set a new record for December 3 at Washington. The National Weather Service report: The 69° at Dulles and 70° at Baltimore/BWI failed to reach their respective records of 74° and 72° from 1998, however.

Other record reports around the region so far: To the south, in North Carolina: Nationally, as shown in the widget to the left, over 6000 high temperature records have been set or tied so far in 2012.


Posted by Steve Scolnik at 4:58 PM No comments:

December 3 Update: The number of new high temperature records for the first 2 days of December has now reached 195 in the 48 contiguous states, a ratio of nearly 100 to 1.

8 PM Update: Here are some National Weather Service record reports for December 2, including record high minimums: 5 PM Update: The map of U.S. daily high temperatures for December 1 from Unisys shows that, except for higher elevations, sub-freezing readings were limited to the immediate Canadian border and northern New England (click to enlarge).

Posted by Steve Scolnik at 2:46 PM No comments: