Washington's high temperature of 96° last week seemed just a bit too high to end the near-record string of 90°+ temperatures this year. Sure enough, the temperature popped up this afternoon ahead of some light rain showers and hit a high of 92°. This is the 63rd day of 90° or higher temperatures this year, although the pace has now slipped a couple of days behind the record year of 1980, which eventually reached a total of 67 days.

Raleigh, which had just tied its annual record yesterday, broke the record with its 84th day this year of 90°+ temperatures and a high of 94°.

Richmond, which also hit 94°, extended its new record to 74 days. 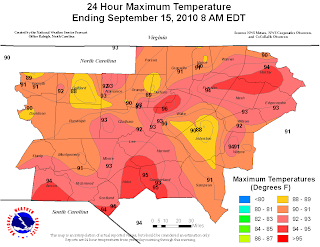 The Weather Channel twitches that today's 90°+ temperatures in Raleigh NC have tied the annual record of 83 days in 2007. Highs in the lower 90s are also forecast for Thursday and Friday.

Original Post:
Although there has been minimal direct effect on the U.S., the 2010 hurricane season has been setting records for storm intensity. In his WunderBlog this morning, Dr. Jeff Masters notes the significance of Hurricane Julia's intensification to Category 4.
Image (click to enlarge): GOES satellite infrared image shortly before 2 pm today (September 15) shows 3 tropical cyclones lined up along and near latitude 20N in the Atlantic and Caribbean: Tropical Storm Karl (left, over Yucatan Peninsula), Category 4 Hurricane Igor (right-center, between 50W and 60W longitude), Category 4 Hurricane Julia (right), from CIMSS/University of Wisconsin
Posted by Steve Scolnik at 1:53 PM No comments: