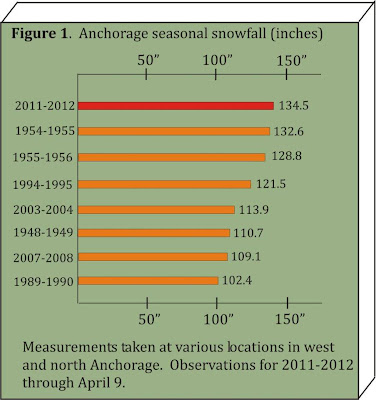 Original post:
As of Saturday evening, Anchorage, Alaska set a new seasonal snowfall record with 134.5". From the National Weather Service:
Posted by Steve Scolnik at 12:57 AM No comments: 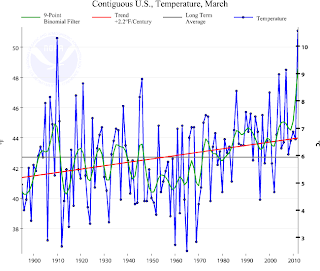 April 9, AM Update: The National Climatic Data Center (NCDC) posted the preliminary U.S. climate summary for March this morning. The report confirmed that this was the warmest March for the contiguous 48 states since the beginning of official national climate statistics in 1895. The average temperature of 51.1° was 8.6° above the long-term March average and a significant 0.5° above the previous record in March 1910. The only previous month in 118 years of data with a greater departure from average was January 2006.

The extent of the record breaking was truly astonishing. Among the highlights:
The average temperature of 42.0° for January-March in the contiguous U.S. was also the warmest on record at 6.0° above the long-term average. For the 3 months, 25 states had their warmest first quarter, and 16 more had top-10 temperatures.

For the 6-month cold season (October-March), it was the second warmest on record (3.8° above average) for the contiguous U.S., behind 1999-2000. There were 21 states across most of the Northeast and Midwest with record warm cold seasons. 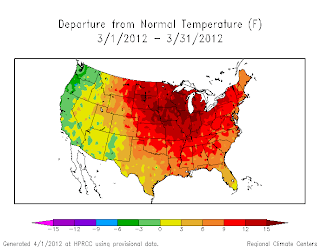 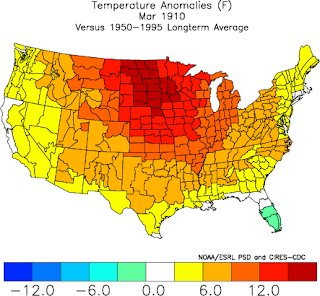 After the warmest March in both the Northeast and Midwest it was to be expected that the extreme heat of March 2012 exceeded even the previous record March of 1910 in the contiguous U.S. From Stu Ostro of The Weather Channel:

Details to be posted as they are available.
Posted by Steve Scolnik at 12:32 AM No comments: