Original post:
The House Select Energy Independence and Global Warming held a hearing yesterday (May 6) on the "Foundation for Climate Science". The committee majority invited 4 scientists to testify:
The minority invited the Discount Viscount, Lord Monckton of Brenchley.

The witnesses were requested to address 3 questions:
The highlight of the hearing: Rep. Jay Inslee (D-WA) takes apart the Discount Viscount, beginning at about 1:10:35.

After discussing real science with the actual scientists, Inslee quizzes Monckton on his false representation as a member of the House of Lords and his utter lack of scientific qualifications.

The National Climatic Data Center's (NCDC) preliminary analysis of April temperatures, released within the last hour, shows a very warm month across most of the U.S. Record or near-record heat extended from the Northeast through the Mid Atlantic, Ohio Valley, and Great Lakes areas. 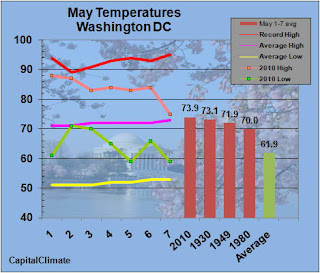 Original post:
Following the record warmest first week of April, Washington's summer-like first week of May is on the verge of setting another record. Since records began at or near the current location of Washington National Airport in 1930, there have been only 2 years in which May 1-7 averaged above 70° (1949 and 1930). Following yesterday's midnight low of 66° after a high of 84°, the average through May 6 is 75.1°, well above the 73.1° for the first week of May in 1930. This morning's low of 59° with a forecast high of at least 75° this afternoon yield an expected weekly average of 73.9° or more.

Interestingly, there have been no daily high temperature records set or tied during this period. On May 3, however, the record high minimum of 70° blew away the old record of 65° in 1983. The minimum of 71° on May 2 was also a new record. In 1930, record highs were set on both the 2nd and 7th.

Posted by Steve Scolnik at 10:07 PM No comments:

The rumors regarding a possible move of former WRC (Channel 4) meteorologist Bob Ryan to WJLA (Channel 7) continue. According to a post today at dcrtv.com, Ryan was seen at the Allbritton company Sunday brunch after this weekend's White House Correspondents' annual dinner. Allbritton is the parent of WJLA.