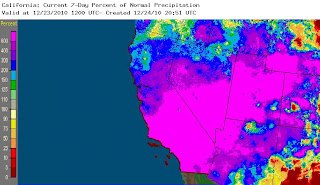 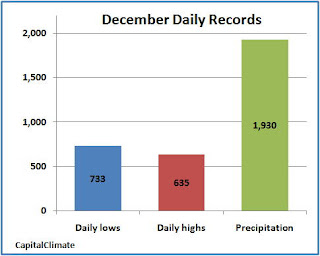 Oil prices are approaching $90 a barrel, reaching a high of $89.97 in today's trading on the NYMEX exchange and closing at a 2-year high. It's also cold in much of the eastern U.S. and western Europe where a lot of heating oil is consumed, so the weather must be causing the price rise, right?

Well, not really. CNBC's Squawk Box this morning had an extended interview with John Kingston, Platts Global Director Of News. He stated that of the major factors affecting oil prices, weather was perhaps third. The primary cause of the price rise is an imbalance between a probably unprecedented increase in demand and OPEC's inability to expand production at a sufficient rate. In particular, China's consumption has increased by 13% since November 2009, driven at least in part by conversion of electricity generation from coal to diesel.

Kingston's outlook for 2011: $100 per barrel is well within reach based on demand forecasts. Veteran oil analyst Charles Maxwell, interviewed on Bloomberg, sees $150 in the next several years.

Posted by Steve Scolnik at 6:01 PM No comments:

Who's the Biggest Terrorist? Yo' Mama!

Dec. 21 PM Update: Meteorologist Jeff Masters yesterday posted a review of a presentation at the recent American Geophysical Union meeting in San Francisco. The presentation by Shimon Wdowinsky of the University of Miami proposed a plausible mechanism by which the severity of the Haiti earthquake could have been influenced by deforestation and several major hurricanes which affected the country in 2008:

At last week's American Geophysical Union (AGU) meeting last week in San Francisco, Shimon Wdowinsky of the University of Miami proposed a different method whereby unusual strains on the crust might trigger an earthquake. In a talk titled, Triggering of the 2010 Haiti earthquake by hurricanes and possibly deforestation , Wdowinsky studied the stresses on Earth's crust over the epicenter of the mighty January 12, 2010 Haiti earthquake that killed over 200,000 people. This quake was centered in a mountainous area of southwest Haiti that has undergone severe deforestation—over 98% of the trees have been felled on the mountain in recent decades, allowing extreme erosion to occur during Haiti's frequent heavy rainfall events. Since 1975, the erosion rate in these mountains has been 6 mm/year, compared to the typical erosion rate of less than 1 mm/yr in forested tropical mountains. Satellite imagery (Figure 2) reveals that the eroded material has built up significantly in the Leogane Delta to the north of the earthquake's epicenter. In the 2008 hurricane season, four storms--Fay, Gustav, Hanna, and Ike--dumped heavy rains on the impoverished nation. The bare, rugged hillsides let flood waters rampage into large areas of the country, killing over 1,000, destroying 22,702 homes, and damaging another 84,625. About 800,000 people were affected--8% of Haiti's total population. The flood wiped out 70% of Haiti's crops, resulting in dozens of deaths of children due to malnutrition in the months following the storms. Damage was estimated at over $1 billion, the costliest natural disaster in Haitian history. The damage amounted to over 5% of the country's $17 billion GDP, a staggering blow for a nation so poor. Tragically, the hurricanes of 2008 may have set up Haiti for an ever larger disaster. Wdowinsky computed that the amount of mass eroded away from the mountains over the epicenter of the 2010 earthquake was sufficient to cause crustal strains capable of causing a vertically-oriented slippage along a previously unknown fault. This type of motion is quite unusual in this region, as most quakes in Haiti tend to be of the strike-slip variety, where the tectonic plates slide horizontally past each other. The fact that the 2010 Haiti quake occurred along a vertically moving fault lends support to the idea that the slippage was triggered due to mass stripped off the mountains by erosion over the epicenter, combined with the extra weight of the extra sediment deposited in the Leogane Delta clamping down on the northern portion of the fault. Wdowinsky gave two other examples in Taiwan where earthquakes followed several months after the passage of tropical cyclones that dumped heavy rains over mountainous regions. His theory of tropical cyclone-triggered quakes deserves consideration, and provides another excellent reason to curb excessive deforestation!

. . . I happened to see the AP's annual catalog of disaster and realized that the greatest terrorist of all...isn't some radical bomb-thrower. It's The Planet.

In the year 2010, earthquakes, heat waves, floods, mega-typhoons, blizzards, landslides and droughts killed a quarter of a million people - most of them in January's earthquake in Haiti.

By the AP's calculations, that's more than TWICE the number of people who died in terrorist attacks in the last 25 years, COMBINED. . .

More audio at MyNorthwest.com
This is particularly relevant given the 4 solid pages of prime A-section real estate in today's high-fiber WaPo devoted entirely to analyzing the hundreds of billions being spent annually on "public safety." Apparently we can't afford to spend even a small fraction of that on the much deadlier threat from Momma Nature's attempts to kill us.
Posted by Steve Scolnik at 9:35 PM No comments: 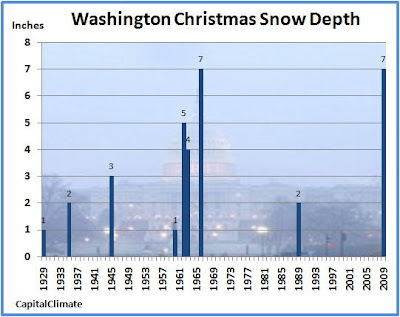 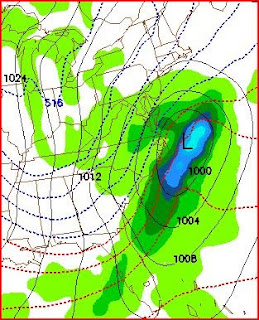 The graph shows snow depth on the ground in Washington on Christmas for each year since 1929. By the way, the 7" last year, while tying the record for the period, had completely disappeared the next day. Note to Ice Ager Linkbot Tom N: If you can find a trend in that data, you deserve to beat out Fred the Singe-r for the Nobel Prize in Cherry Picking.
Posted by Steve Scolnik at 2:25 PM No comments: 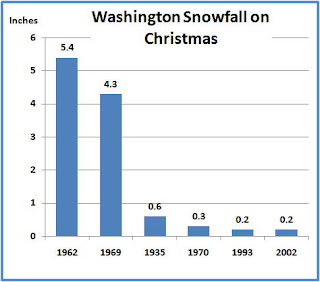 In fact, this year the cold air is firmly entrenched, but that didn't prevent the earlier outlook for Washington snow [the week before] Christmas to be a complete bust today. Some previous indications of the white stuff for Tuesday have also trended strongly toward the bust-bucket. Nevertheless, some models are hinting at the possibility of a storm developing late in the week and bringing some Washington snow on Christmas.

Three years ago, CapitalClimate surveyed the climatological prospects for Washington snow on Christmas:

Image (click to enlarge): Washington snow on Christmas (amount falling on December 25) since 1929; CapitalClimate chart from NWS data
Posted by Steve Scolnik at 11:00 PM No comments:

Greetings of the season, from MIT TechTV's animated snow globe (click arrow below to play; adjust speakers, volume may be loud):

Email ThisBlogThis!Share to TwitterShare to FacebookShare to Pinterest
Labels: Video 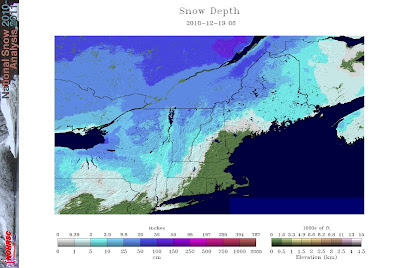 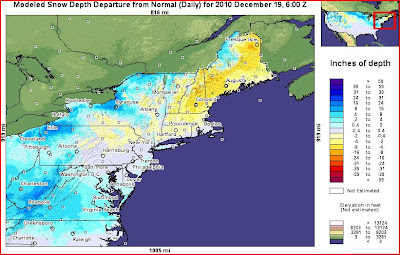 The 1.4" of snow which fell at Syracuse, NY on Friday, December 17, brought the monthly total so far to 70.9". This is the highest amount ever recorded in December at Syracuse. The old record was 70.3" in 2000. Aided by a persistent northwesterly wind over an unfrozen Lake Ontario, snow has fallen on all but 4 days so far this month. Six inches or more fell on each of 4 consecutive days from the 5th through the 8th, and there have been 3 days with at least 10" each.

With a little less than 2 weeks left, this month is now within 0.1" of tying the 4th highest monthly total in Syracuse history dating back to 1902: The latest forecast indicates that the greatest chance for more snowfall in the coming week is a 50% probability of snow showers on Monday.

Today's snow depth map for the Northeast from the National Weather Service shows heavy amounts in the lee of the Great Lakes and in the Adirondacks and mountains of northern New England, but little or nothing along the coast and most interior sections.
Posted by Steve Scolnik at 5:43 PM No comments: