Last night's PBS News Hour had a report on the climate clock recently installed in Manhattan, a block away from Madison Square Garden and Macy's. The counter displays total worldwide emissions of carbon dioxide, which are increasing at the rate of 800 metric tons a second. The current number on the display is over 3.64 trillion. A desktop widget of the counter is available for download.
Posted by Steve Scolnik at 2:14 PM 2 comments: 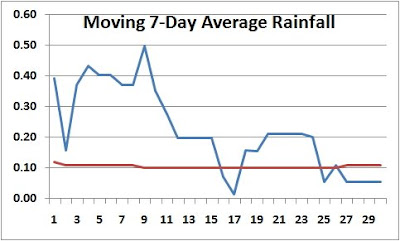 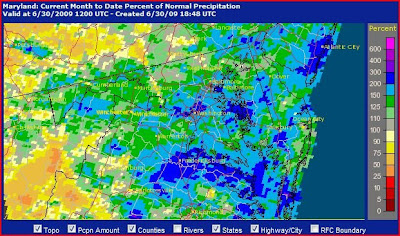 Midnight Update: An additional 0.02" this evening brings the monthly total to 5.86".

Original post:
With only a minimal chance of a passing shower through the rest of today, this June will go into the record books with precipitation slightly under 200% of average in Washington, DC. Far from setting any records, however, the official Washington National observation of 5.84" is not enough to put this month in the top 20 wettest Junes. Monthly precipitation for June has reached double digits 3 times in history; this is exceeded only by the 5 Septembers which have seen more than 10". The most recent occurrence was only 3 years ago, when the June monthly record of 14.41" was set.

In a carryover from May's heavy precipitation, the first 10 days of June were the wettest on average, as shown by the chart of the 7-day moving average above (normal daily amounts are shown by the red line). By the middle of the month, only 0.08" of rain fell in the week ending on the 17th. Average daily amounts picked up somewhat from there, but the month ended with only about half the normal daily amount.

Although widespread areas in northern Virginia through central Maryland and the vicinity of Baltimore have had over 150% of their June rainfall, parts of western Virginia and especially the state of West Virginia have seen substantial shortfalls of precipitation for the month.
Posted by Steve Scolnik at 4:04 PM No comments:

More record heat was observed in Texas on Monday, June 29: Some perspective on the heat wave through June 28 from the National Weather Service:
Posted by Steve Scolnik at 9:31 PM No comments:

After setting an all-time June heat record on Wednesday, Houston tied that record of 104° on Friday; a record high minimum was also set Saturday, with a record also likely today: Other records set or tied on Sunday, June 28:
Posted by Steve Scolnik at 5:51 PM 1 comment: