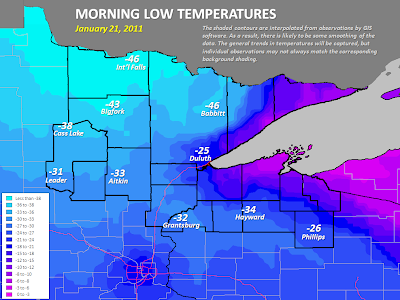 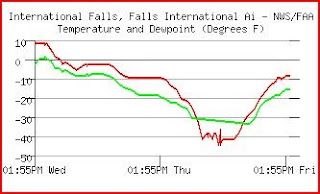 The state record low temperature in Minnesota was recorded at Tower, Minnesota on February 2, 1996. The low was -60 degrees. That was also the coldest temperature ever recorded east of the Mississippi River.

The state record low temperature in Wisconsin was recorded at Couderay on February 2nd and February 4th of 1996. The temperatures dipped down to -55 degrees both nights.

Temperatures by mid-afternoon had warmed to -8° at International Falls.

Other low temperatures for January 21 reported by the National Weather Service include:

January 14th (last Friday) was the midpoint of meteorological winter (December-February). Following the coldest month of 2010 in December (4.9° below average), Washington temperatures have been considerably milder relative to seasonal normals in the first half of January, averaging 0.7° below the climatological mean. If temperatures continue for the rest of the winter at the current average of 3.4° below climatology, this will be the coldest winter since 2003, which was 3.5° colder than the long-term mean. Including this year, the 12 winters of this century so far have averaged 0.3° warmer than climatology.

On a wider scale, Washington is on the northern edge of an area of colder than average winter temperatures extending westward to the Ohio Valley and southward through the southeastern states. Some small areas in Georgia and the Carolinas have been as much as 6°C colder than average. Nearly all of the rest of the U.S. has been within +-2°C of average, with above average temperatures in most of the western half of the country.

In the rest of North America, however, much warmer than average temperatures have predominated over northern and eastern Canada. A large area of temperatures at least 14°C above average extends from Hudson Bay to Greenland. (Note that the polar stereographic projection of the map preserves geographic sizes between latitudes.) For more details on the record warm Canadian temperatures, see the article from the National Center for Atmospheric Research:
Cold comfort: Canada's record-smashing mildness

The North American 2010-2011 winter temperature has been controlled by a persistent atmospheric circulation pattern which features very strong high pressure over eastern Canada and Greenland, coupled with low pressure from the eastern U.S. eastward across the central Atlantic. The height of the 500 mb surface (roughly the middle of the atmosphere) has been over 250 meters above normal through the first half of the winter over a large area from Baffin Island (north of Hudson Bay) to southern Greenland. On the other hand, heights from the Virginia/North Carolina coast eastward into the Atlantic have been as much as 150 meters below average.
Posted by Steve Scolnik at 6:48 PM No comments:

Amid all the amateur weather video engulfing social media and infiltrating The Weather Channel and other broadcast outlets, one product of the New York post-Christmas blizzard stands way above the rest. Veteran film critic Roger Ebert has this to say in his blog regarding "Man in a Blizzard," by Jamie Stuart:

This film deserves to win the Academy Award for best live-action short subject.
(1) Because of its wonderful quality. (2) Because of its role as homage. It is directly inspired by Dziga Vertov's 1929 silent classic "Man With a Movie Camera." (3) Because it represents an almost unbelievable technical proficiency. It was filmed during the New York blizzard of Dec. 26, and Jamie Stuart e-mailed it to me with this time stamp: December 27, 2010 4:18:18 PM CST.

You can tell from the cinematography he knew exactly what he was doing and how to do it. He held the Vertov film in memory. Stuart must already been thinking of how he would do the edit and sound. Any professional will tell you the talent exhibited here is extraordinary.

YouTube hits for the video are now over half a million.
Posted by Steve Scolnik at 5:40 PM No comments: