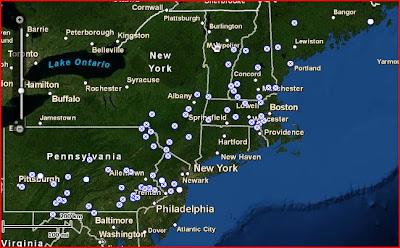 The number of all-time October daily snowfall records set on October 29 has now increased to 27. In addition to the records previously reported are the following (previous record in parentheses): An additional 69 records were reported broken yesterday (October 30). These were primarily cooperative reporting stations, but the official station at Portland, Maine reported a new record of 5.2", vs. the old record of 3.6" (1969-10-22) in a 91-year snowfall history.
Posted by Steve Scolnik at 2:06 PM 2 comments:

The current October snowfall in the northeastern U.S. has certainly been impressive, particularly in the areal extent, but the historical record shows that autumn snowstorms were both earlier and more frequent in the mid-19th century. In his definitive history, "Early American Winters", David Ludlum lists records of early season snowfalls in 21 of the 50 years from 1821 to 1870, including many in September and several in late August. The mid-1830's were particularly prolific, with 3 events before the middle of October in 1836, including at least "some snow" as far south as South Carolina.

[More reports to be added later]
Posted by Steve Scolnik at 1:47 PM No comments: 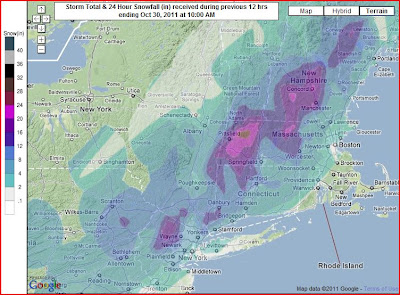 11 AM Update: The Weather Channel is reporting via tweet that Jaffrey NH had a storm total of 31.4". A National Weather Service report has increased the Plainfield MA amount to 30.8".

Original Post:
What was little more than a very heavy frost in the Washington, DC metro area yesterday set some all-time October daily snowfall records at higher elevations and north of the Mason-Dixon line. Preliminary data indicate that 20 October daily records were set from West Virginia through New York. Among the major reporting locations, New York's Central Park had the longest period of record (135 years), with the 2.9" smashing the previous record of 0.8" on October 30, 1925. It was therefore the first time that over 1" of snow had been observed in Central Park in October. Other October daily records included (previous record in parentheses): The largest amounts of snow from this storm were in the Berkshires of western Massachusetts, where totals of 2 feet or more were reported; the highest was 27.8" at Plainfield. The highest amounts reported by the National Weather Service by state through Sunday, October 30, included:
Posted by Steve Scolnik at 10:26 AM No comments: