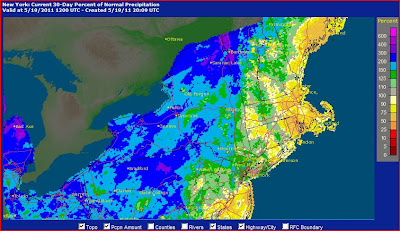 Image (click to enlarge): 30-day precipitation percentage of normal ending 8 am EDT, May 19, 2011, from National Weather Service
Posted by Steve Scolnik at 5:01 PM No comments:

Original post:
NOAA's Climate Prediction Center announced its 2011 Atlantic hurricane season outlook at 11:30 this morning, calling for an above-normal level of activity:
The major factors affecting the tropical season include:

As this video from CNBC at 11:45 shows, Mr. Market couldn't care less. "Til it happens, we're just going to play it by ear", said a veteran trader.

If you think the market mechanism is a rational way to set energy policy, have I got a deal for you:

Note that the horizontal scale covers just a little over 2 and a half hours. The offering price for LinkedIn was $45. This is for a company which has no earnings and revenues which are about 1/30 of the IPO offering price.

Update: From someone who should know a thing or two about Internet bubbles, Henry Blodgett, see:
CONGRATULATIONS, LINKEDIN! You Just Got Screwed Out Of $130 Million
Posted by Steve Scolnik at 12:11 PM No comments:

If at First You Don't Secede: South Carolina Stands Up for Incandescent Bulb Rights

The Colbert Report has the full details on South Carolina commemorating the 150th anniversary of the War of Yankee Aggression by standing up for the right to incandescent light. South Carolina has proven it "knows how to run a black market."

Posted by Steve Scolnik at 1:01 AM No comments: 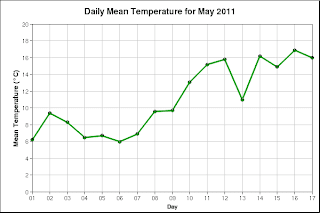 CNBC reported this morning (click image to view video) that massive wildfires in Alberta, Canada, fueled by high winds and very dry conditions, have forced some oil operations in the province to shut down. The fires, which at the peak numbered over 100, have burned entire towns to the ground. The town of Slave Lake, population 7000, has been one-third destroyed, with all residents evacuated.

The government reported on Wednesday that 87 fires were still burning, with 23 out of control, including the one in Slave Lake.

Slave Lake temperatures in the past week have been well above the May average of 9.7°C. The May total precipitation to date of 4.5 mm. is barely over 10% of the normal monthly total of 40.9 mm.; no more than 1 mm. has fallen on any individual day this month.

More video (click to play) from AP, via Google News:

Image to right above (click to enlarge): May 2011 daily average temperature at Slave Lake, Alberta, Canada, from Weather Office/Environment Canada
Posted by Steve Scolnik at 6:10 PM No comments: