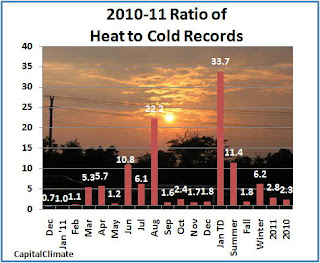 At the midpoint of meteorological winter (December-February), new high temperature records are outnumbering low temperature records in the U.S. by a ratio of 6.2 to 1, according to preliminary reports from the National Climatic Data Center. Thanks to an incredible ratio of nearly 34 to 1 in the first half of January, the seasonal ratio is the highest since the over 11 to 1 value last summer. The total count of 2545 new heat records for the first 6 weeks for winter outnumbers the total cold records in the last 6 months of 2011.

The preliminary analysis from NOAA/NCEP data for December 1-January 16 shows the warmest temperatures relative to average (as much as 8°C above) in western Canada, extending southeastward across most of the U.S. The only area in the country with substantially below-average temperatures includes New Mexico and southwestern Texas.

Posted by Steve Scolnik at 1:37 PM No comments:

12:30 AM CST Update: It's semi-official; the preliminary daily climate summary for January 18 reports a low temperature of -1° at the Twin Cities. St. Cloud hit -9° tonight after having been -3° in the morning.

Original post:
The temperature this winter has remained above 0° at Minneapolis through January 17 (Tuesday), at least tying the record for latest below-zero reading, on January 18 in 1889 and 2002. After the morning low of +2°, the temperature was at 0° as of 11 pm CST and falling. The midnight temperature was -1°, so the record was missed by 1 hour. The National Weather Service reported earlier:

The likelihood of witnessing a below zero temperature across southern Minnesota and west central Wisconsin during any given winter is very good indeed. There has NEVER been a winter where temperatures failed to drop below zero.

Mankato has also not dropped below zero this winter, as of January 17th. However, the low temperature is expected to drop below zero Thursday morning, ending the streak there as well. The least number of below zero days for a given winter in Mankato was 6 back in the winter of 1982-1983.

Posted by Steve Scolnik at 12:41 AM No comments:

CNBC has confirmed within the past hour that the Obama administration will reject the application for the TransCanada Keystone XL oil sands pipeline. Energy prices are generally unaffected: