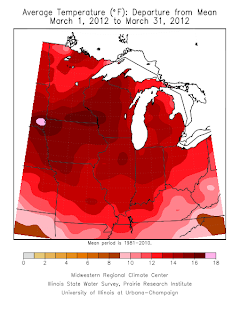 The Midwestern Regional Climate Center has reported that March average temperatures were the warmest on record for all 9 of the states in the Midwest region:

March was the warmest on record for the nine-state Midwest region, based on preliminary temperature data. The average temperature for the region was 50.3 degrees Fahrenheit, which breaks the previous record of 46.9 degrees set over 100 years ago in 1910 . . .