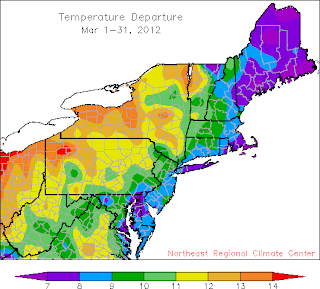 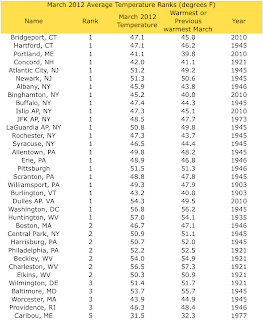 The Northeast Regional Climate Center reports that March was the warmest on record in 7 out of the 12 states in the region, including 23 of the 35 major (first-order) climate reporting stations. This was the 12th consecutive above-normal month in the Northeast, and the 5th consecutive month for all 12 states:

The Northeast saw its warmest March in 118 years, beating out the previous warmest March (1945) by 0.9 degrees F. The region's monthly average temperature, 44.4 degrees F, was 9.8 degrees F above normal. March's average was only 1.9 degrees F cooler than April's normal average temperature and, with highs in the 80's as far north as Maine, some days felt quite summerlike! Between March 7th and 23rd, at least 127 new maximum temperature records were set at the thirty-five first order stations in the Northeast. It was the warmest March at twenty-three of the Northeast's first order stations; averages at the remaining stations ranked them between the 2nd and 5th warmest on record. Of the twelve states in the region, seven had their warmest March since 1895 (CT, NJ, NY, PA, RI, VT, WV), three placed second warmest (DE, MA, NH), Maryland saw its third warmest, and Maine, its sixth warmest. Temperature departures ranged from +6.9 degrees F in Maine to +11.2 degrees F in New York. The string of above normal months stretched to twelve, and it was the 5th consecutive month with warmer than normal temperatures in all twelve states. The average for the first three months of 2012 was 34.7 degrees F, which was 6.6 degrees F above normal. It was the Northeast's warmest January through March since 1895, beating the previous record year, 1998, by 1.4 degrees F. Ten of the twelve Northeast states had their warmest January through March since 1895. Maine and Maryland missed the top spot by 1.7 and 0.1 degrees F, respectively.