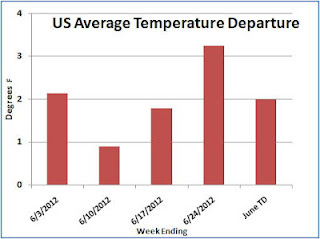 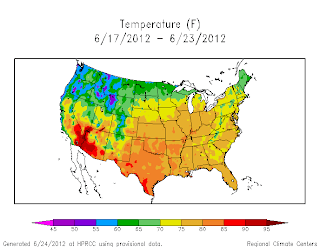 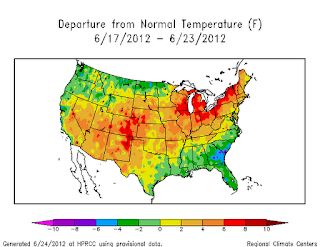 Preliminary data from 214 National Weather Service stations indicate that the 48-state contiguous U.S. average temperature was above normal for the 28th consecutive week in the 7 days ending yesterday (June 23). Once again, the Pacific Northwest and Southeast were relatively cool, but the heat intensified in a broad range from the Southwest through the middle of the country to the Mid Atlantic and Northeast.

The weekly unadjusted average was 3.2°F above the 1981-2010 climatology, up from 1.8°F the previous week. This brings the June average to date to slightly under 2°F warmer than normal.

The warmest locations were Colorado Springs, Colorado (CO-COS) and Chicago, Illinois (IL-ORD) at +11°F and the coolest was Key West, Florida (FL-EYW) at -5°F. Only 16% of locations were cooler than average.

This is not good.