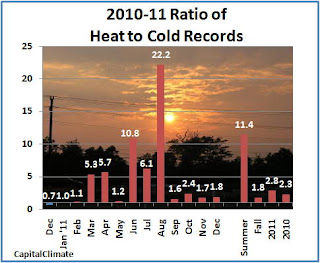 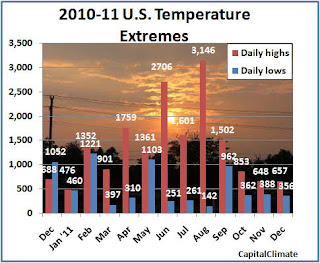 Aided by a strong warm surge toward the end of the month, new U.S. daily high temperature records exceeded daily cold records in December by a ratio of 1.8 to 1, a margin of 80%. The overwhelming excess of heat records continued into New Year's Day, when the 116 high maximum records set or tied absolutely crushed the one lonely low minimum record (at a co-operative station 3 miles northeast of Marlin Texas).

The December high/low record ratio was equal to the ratio for the preceding fall season, but the extreme summer ratio of over 11 to 1 pushed the annual value to 2.8 to 1, well above the 2.3 to 1 in 2010. Although January's heat records were only about 4% more numerous than the cold records, the ratio was over 1 for every individual month in 2011. The last time cold records exceeded heat records in a month was a year ago, in December 2010.

For 2011 as a whole, U.S. temperatures averaged above the new 1981-2010 climatological base nearly everywhere east of the Rocky Mountains. The heat bullseye was centered in the drought areas of Oklahoma and northern Texas. The coldest areas relative to average were in the Pacific Northwest and California.

Posted by Steve Scolnik at 6:27 PM