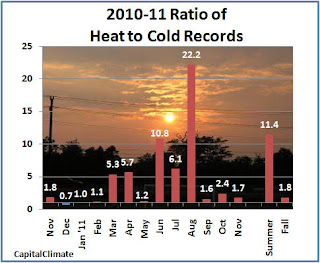 Following summer's spectacular pace of over 11 daily heat records for every cold record in the U.S., the ratio for meteorological autumn (September-November) declined to 1.8 to 1. While November's ratio of 1.7 to 1 was well below the August peak of 22.2 to 1, it was the 11th consecutive month in which heat records exceeded cold records. December 2010 was the only month since February of last year in which cold records outnumbered record highs. For the year 2011 to date, the cumulative ratio is 2.9 to 1, vs. 2.3 to 1 for 2010.

Preliminary NOAA/NCEP data show that fall temperatures averaged above the new 1981-2010 base period over much of the U.S., particularly along the northern border and into Canada. Temperatures averaged at least 2°C above normal across the northern Plains and northern New England. The only significant area of below average temperatures was in parts of the Southeast, including Georgia, Alabama, southern Mississippi, southern South Carolina, and northern Florida.

More details on November's temperatures should be available later this week when the National Climatic Data Center issues its State of the Climate National Overview.