Early Spring Heat Records March On; Outnumber Cold Records by Over 5 to 1 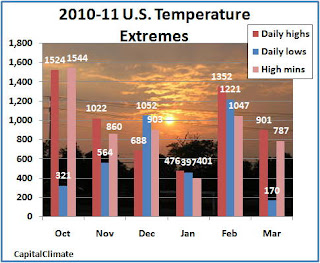 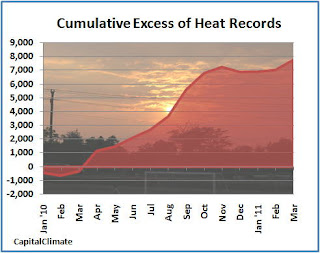 For related record temperature posts, see:
There will probably be a few stragglers yet to report, but the National Climatic Data Center figures show that daily high temperature records in the U.S. during March were over 5 times as numerous as low temperature records. The ratio of 5.30 to 1 exceeded even the massive 5.22 last September and was the highest since 6.07 in April 2010.

Every month in the last 13, except December, has now had more heat records than cold records. The cumulative ratio since January 2010 is 2.07. Thanks to the near-parity of records in January and February, the ratio for 2011 to date is only 1.47, but that is well ahead of the pace through the first quarter of last year.

Preliminary data through March 30 from NOAA show that the month was above average over much of the U.S., with the exception of the Pacific Northwest and the Northern Plains.

Posted by Steve Scolnik at 5:04 PM

Cap Climate: I think that sometime last year you posted new research on the tendency of precipitation to be more concentrated in heavy events. Do you recall this research?

Sorry, I don't seem to have done anything on that, but if I can find a link, I'll post it.