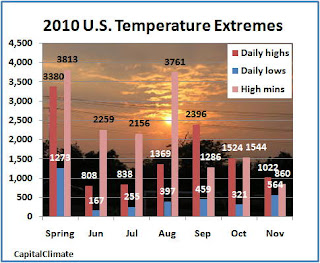 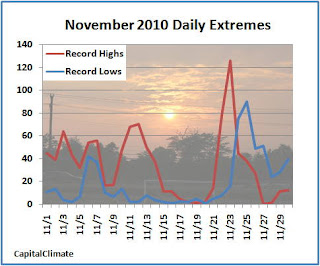 For related record temperature posts, see:
As they have for every month in 2010 except January and February, U.S. daily maximum temperature records far exceeded minimum records in November. Thanks to a cold surge in the last week of the month, the ratio of heat records to cold records declined to 1.8:1, but the ratio of 2.7:1 for the year to date is still well above that of the most recent decade.

Heat records dominated cold records by a wide margin for most of the month, reaching a peak of 126 on the 23rd. Daily cold records, on the other hand, peaked at 90 on the 25th.

Preliminary average temperature data for November from NOAA/NCEP show temperatures near to above average over nearly the entire country. Small areas along the immediate Carolina coast and from central Nevada through western Arizona were the only regions with temperatures more than 1°C below the 1968-1996 climatological average. Temperatures were at least 1°C above average over most of the area from the Rockies to the Appalachians, with the warmest temperatures of 3°C or more above average across the northern Great Lakes northward into a large portion of southern and central Canada.

More detailed temperature analyses should be available from the NOAA National Climatic Data Center (NCDC) around the middle of next week.