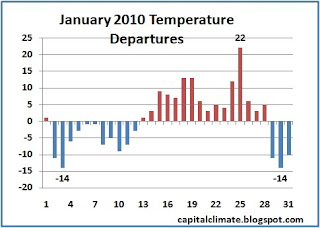 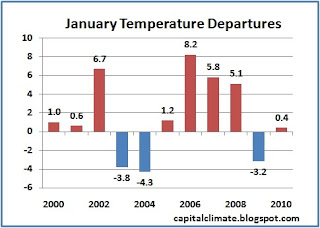 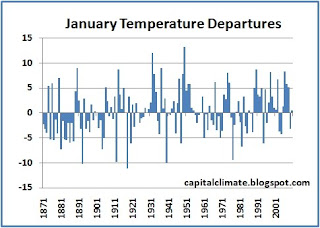 There were 23 days with lows of 32° or below, and 6 of these failed to reach a high above freezing. These were a little more than the normals of 20.7 and 4.6, respectively.

Despite the frenzy of the snow obsessive-compulsives, the only statistic which really stands out for this January is the precipitation deficit. Following an excessively wet December, the year is starting out at less than 50% of average. The preliminary total of 1.36" may have to be revised upward, however, as December's was. The reported 0.13" of liquid associated with 6.4" of snow on the 30th would imply an astonishingly high ratio of over 49:1 of liquid to frozen precipitation. Including the measly 1" of powder which fell on the 8th, the total snowfall was only a little more than 1" above average.