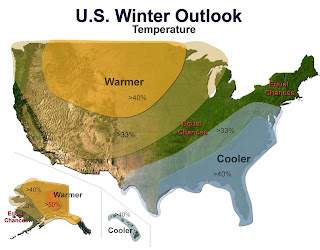 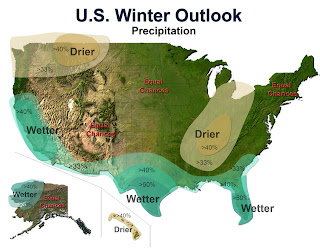 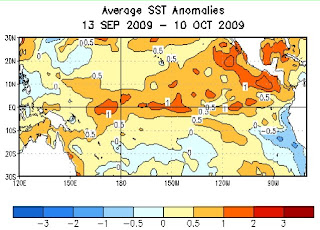 In honor of Blog Action Day, here's a view of an effect which has a shorter time scale than climate, seasonal weather:

NOAA's Climate Prediction Center this morning issued its outlook for winter 2009-10 (December-January-February) in the U.S. It calls for a strengthening El Niño in the central and eastern tropical Pacific to dominate weather patterns for much of the country. The relatively warm Pacific water temperatures are expected to affect tropical rainfall distribution and in turn influence the strength and location of the storm track over North America.

Precipitation is expected to be heavier than average along the central and southern West Coast eastward along the southern border and Gulf Coast through Florida. The wettest areas are likely to be most of California, central and southern Texas, and Florida. The driest areas relative to average are predicted to be the Pacific Northwest eastward across the northern Rockies and also from the northern Gulf States northeastward through the Ohio and Tennessee Valleys to the eastern Great Lakes.

Unlike the hype-casts promoted by certain commercial forecast services and media, the NOAA forecast recognizes the futility of predicting snowfall at seasonal time scales:

This seasonal outlook does not predict where and when snowstorms may hit or total seasonal snowfall accumulations. Snow forecasts are dependent upon winter storms, which are generally not predictable more than several days in advance.