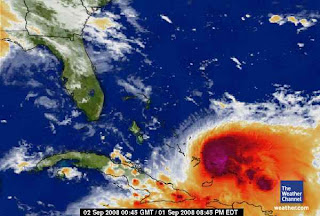 11 pm Update:
8 pm Update: Hurricane Gustav has continued to weaken today as it moves further inland. At 8 pm, the storm was a minimal Category 1 hurricane with winds of 75 mph. It was located in central Louisiana, moving northwest at 14 mph. Gustav will continue to bring heavy rains to portions of Louisiana, as well as southern and western Mississippi, northeastern Texas, Arkansas, southern Missouri, and southeastern Oklahoma. Isolated amounts up to 20 inches are possible.

Hanna has strengthened to a hurricane with maximum winds of 80 mph. It is now nearly stationary near the Caicos Islands. It is expected to gradually begin moving northwestward toward the central Bahamas in the next couple of days, eventually reaching the Southeast Coast.

As expected, Tropical Depression 9 became Tropical Storm Ike with maximum winds of 50 mph. It is located well out in the Atlantic, about 1400 miles east of the Leeward Islands. Ike's westerly track is likely to bring the storm near the southern Bahamas as a hurricane by the middle of the weekend.

As if that wasn't enough tropical excitement, a tropical wave even further out in the Atlantic, about 200 miles from the Cape Verde Islands, is showing signs of organization. It could pop out as Tropical Depression 10 at any time in the next couple of days. If it develops further, it would be Tropical Storm Josephine.

Original post:
The three levels of tropical cyclone are tropical depression, tropical storm, and hurricane. We now have all three active in the Atlantic basin. As Hurricane Gustav moves inland (scroll down to the previous post for details), Tropical Storm Hanna is looking much better organized this morning, and Tropical Depression 9 has formed about halfway between Africa and the Lesser Antilles.

As of 11 am, Tropical Storm Hanna has strengthened to maximum winds of 60 mph. It's moving west southwest around 5 mph towards the southeastern and central Bahamas. The future development of Hanna and its track are tricky. They depend on its interaction with a complex upper level circulation pattern, including the outflow from the weakening Gustav to the west. The current forecast, however, has Hanna strengthening to a hurricane over the Bahamas and threatening the Southeast Coast later in the week.

The just-issued initial advisory on Tropical Depression 9 puts its strength at 35 mph, but it is expected to become Tropical Storm Ike later today. The National Hurricane Center forecast takes the storm generally westward toward the Bahamas as a hurricane.