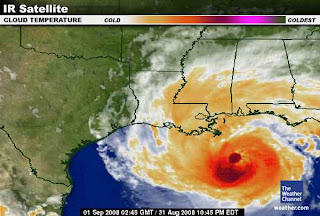 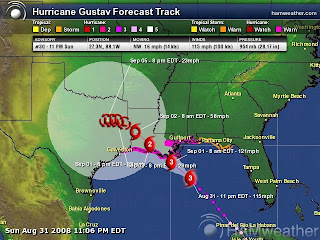 Late PM Update: Hurricane Gustav is holding its Category 3 strength with 115 mph maximum winds as it approaches the Louisiana coast. Forward speed is slightly lower at 16 mph toward the northwest. At 11 pm, the storm was centered about about 220 miles southeast of New Orleans. On this track, Gustav will make landfall in the daylight hours Monday morning.

The lowest pressure, which had been dropping, has leveled off at 954 mb. Dropsonde observations show that drier air is moving into the center of the storm at middle and upper levels. Therefore, little change in intensity is likely before landfall.

Some intensification may occur tonight, but that is likely to be limited; satellite imagery indicates that dry air is wrapping into the circulation from the west and south.

5 pm Update: Hurricane Gustav remains a Category 3 storm at 5 pm with maximum winds of 115 mph. Some fluctuation in intensity may occur overnight, but the storm is expected to remain a major hurricane at landfall in Louisiana tomorrow.

The storm is located about 215 miles south southeast of the mouth of the Mississippi and is moving northwest at 18 mph. The forecast track has shifted slightly to the west, so the Hurricane Warning has been extended westward along the Louisiana and Texas coasts to east of High Island, Texas. Warnings now extend all the way from the Alabama/Florida border to east of High Island.

Although some strengthening is possible before landfall, several factors are working against it:

Ordinarily, a possible hurricane threat to the Southeast coast would get more attention, but Hanna has been overshadowed by big brother Gustav. Plagued by persistent wind shear, Hanna has remained a weak tropical storm. As of 5 pm today, maximum winds were 45 mph. It was moving west at 10 mph from a position about 140 miles east of the Bahamas.

Hanna's future is subject to some complicated interactions with the upper level flow pattern, but its prospects are strong enough for it to threaten the Bahamas as a tropical storm and potentially the Southeast U.S. coast as a hurricane later in the week.

Original post:
Hurricane Gustav has maximum winds of 115 mph as of 2 pm, based on aircraft reconnaissance. The storm continues to move northwest at 17 mph from a position about 270 miles southeast of the mouth of the Mississippi. Gustav remains a dangerous Category 3 storm and some re-intensification, possibly to Category 4, is likely before the storm makes landfall as a major hurricane on Monday. Hurricane force winds currently extend up to 50 miles, and tropical storm winds up to 200 miles, from the center.