March Heat Records Crush Cold Records by Over 35 to 1 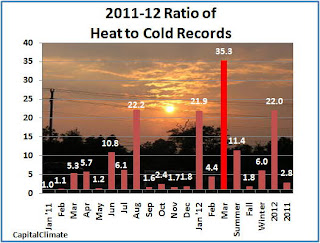 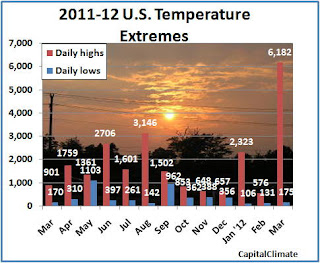 U.S. daily record high temperatures continued to surge into the end of March, with new heat records overwhelming cold records by the incredible ratio of 35.3 to 1. The total number of heat records was 6,182, nearly double the number in the sweltering month of August last year. The monthly count for March was also more than the entire year's total of cold records in either 2011 or 2010. The year-to-date ratio is now at 22 to 1, nearly double last summer's pace.

Included in the total were 340 new all-time March high temperature records vs. only 8 low temperature records, a ratio of over 42 to 1. Over 110 official climate reporting locations (ASOS stations) in 27 states also reported record high average temperatures for March. This represents roughly one-fourth of the total number of such stations.
Posted by Steve Scolnik at 4:39 PM