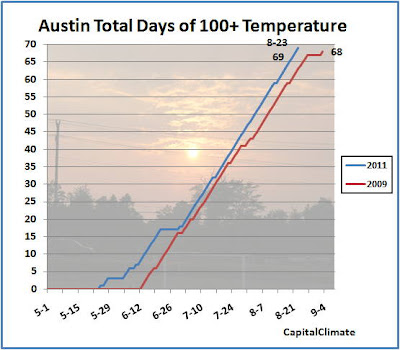 August 24, 2 pm CDT Update: With a temperature of 100° at 2 pm, Austin broke the record for annual days with 100° or higher temperatures. The current count is 70. Record high temperatures are now forecast through the weekend:

Original post:
At 2 pm CDT today, the Austin temperature reached 100°, marking the 69th day this year with 100° or higher temperatures. This ties the record set in 1925. The current temperature is 101°.

Posted by Steve Scolnik at 4:23 PM