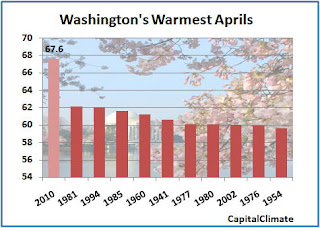 National Weather Service data confirm that Washington's summer-like heat in the first week of April was unprecedented in 140 years of records dating back to 1871. Steve Zubrick of the NWS office in Sterling, VA has reported to CapitalClimate that the April 1-7 average temperature not only exceeded the modern record in 1981 by over 4°, but it also surpassed by over 2° the 65.4° average in the very warm early April of 1929. (The daily record highs of 94° and 93° on the 7th and 8th in 1929 still stand. Temperatures cooled considerably later in the month, however, and 1929 ended with an average of 57.6°, which is now only the 29th warmest April.)

It was also the warmest first week of April in Baltimore.

Posted by Steve Scolnik at 6:09 PM

I read the latest predictions for El Nino. It mentioned more precip for "southeastern" states. Is that the DC area? I thought we were the midatlantic, but don't know if NWS thinks so.

The current seasonal outlook for April-June calls for above-average precipitation from South Carolina through Florida and near-average from North Carolina northward through the Mid Atlantic area. A new one should be issued within the next week.