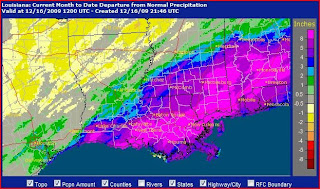 Dec. 21 Update: After several days of drying out, the latest 5-day precipitation forecast (to the right) issued this morning from the National Weather Service/NCEP shows the Gulf Coast getting hammered again, and the forecast discussion from New Orleans indicates the likelihood of severe weather as well.

The 13.14" through midnight at Mobile is a new December record, breaking the record which has stood since 1853. Unofficially, Mobile has received another 0.63" since midnight.

December 18 Update: A total of 1.77" on Thursday brings the New Orleans December rainfall to 24.25", within less than an inch of the all-time record for any month. The Thursday amount is a new daily record for December 18, the third time this has happened in the last 4 days. The old record was 1.46" in 1995.

Original post:
El Niño events tend to bring heavy rainfall to the southern U.S., including the Gulf Coast, and the current one is expected to be no different, but the first half of December has gotten off to a spectacular start. Aided by two consecutive record-breaking days, New Orleans Airport has doubled its previous December monthly rainfall record in just two weeks.

The excessive rain has led to widespread street flooding in the New Orleans metro area.