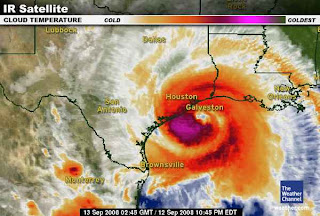 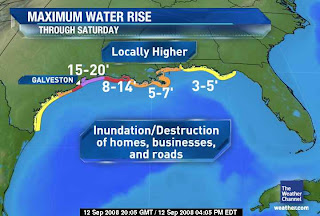 11 pm Update: Hurricane Ike has strengthened this evening to a maximum level Category 2 storm with winds up to 110 mph. The circulation structure has become more organized, and a 40-mile-diameter eye has developed. Doppler radar wind speeds in the northern eyewall have been measured as high as 130 mph at 6500 ft. Hurricane force wind gusts have been reported on Galveston Island.

The center of the storm is wobbling, but it's moving generally northwest at 12 mph. From its position about 55 miles south southeast of Galveston, landfall will occur before dawn on Saturday.

Water levels have already reached 9 to 12 feet above normal along a large section of coast, and storm surge up to 20 feet is likely near the center of the storm.

Original post:
Storm surges have been steadily increasing along the northwest Gulf Coast as very large Hurricane Ike continues to approach landfall. The Category 2 storm is being continually monitored by aircraft reconnaissance, and these measurements show the maximum wind is still 105 mph. The hurricane force winds extend out up to 120 miles, and the tropical storm force winds up to 275 miles, from the center.

The storm remains on a track veering between west northwest and northwest, moving at a speed of 12 mph. At a distance of 135 miles southeast of Galveston, Ike is now about 10 to 12 hours from landfall.

Tide gauges are showing water rises of 8 to 9 feet so far in the Galveston area, and storm surges are forecast as high as 15-20 feet near and to the right (north) of the landfall.

Texas Governor Perry is predicting "Hurricane Ike Could Be Costliest Ever", with a $100 billion dollar impact. This would make Ike the most expensive natural disaster in U.S. history. In anticipation of the storm's effect on refineries, wholesale gasoline prices on the Gulf Coast were as high as $4.85 a gallon today. Natural gas prices were also up, rising 2.6%.

See previous posts for the earlier history on Ike.