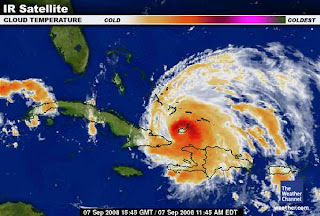 Hurricane Ike has maintained its Category 4 strength as it heads through the southeastern Bahamas toward eastern Cuba. Aircraft reconnaissance this morning has found little change in the central pressure or the maximum winds of 135 mph.

At 11 am, the center of Ike was located very near Great Inagua Island in the Bahamas. The storm's generally westward track will bring it near or over eastern Cuba tonight. As Ike continues westward, the storm will weaken somewhat over Cuba, but it is expected to regain strength after it moves into the southeastern Gulf of Mexico.

A Hurricane Watch has been issued for much of the Florida Keys, and evacuations have been ordered.

Tropical Storm Hanna continues to race off to the northeast, leaving behind widespread heavy rains and flooding. The storm has now lost its tropical characteristics as it moves northeast at 36 mph toward the Canadian Maritimes. Heavy rainfall warnings are in effect for New Brunswick, portions of Nova Scotia, and Newfoundland.

The center was located about 60 miles north of Chatham, Massachusetts at 11 am. On its current track, the remnants of Hanna will pass over Nova Scotia and Newfoundland and on into the North Atlantic, reaching a position northwest of Ireland late in the week.

Images (top to bottom): Ike satellite view from The Weather Channel, Ike and Hanna forecast tracks from National Hurricane Center
Posted by Steve Scolnik at 11:36 AM