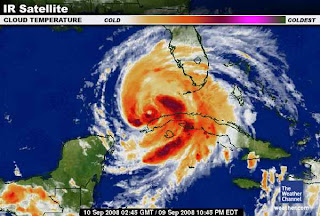 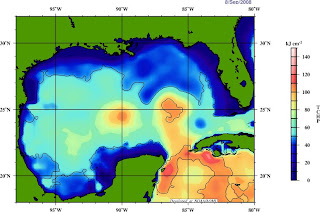 11 pm Update: Hurricane Ike has already started strengthening in the southeastern Gulf of Mexico. Aircraft measurements put the maximum wind speed at 80 mph, but satellite views of a sharpening eye and deepening convection indicate that further intensification is underway. The storm is still forecast to become a major hurricane (Category 3 or higher) before it makes another landfall in about three days. The landfall target is still quite wide; it includes the entire Texas coast.

Current motion is toward the west northwest at a reported speed of 9 mph, although movement has been somewhat slower over the last several hours. At 11 pm, the center was 120 miles west of Havana, Cuba.

Original post:
Minimal Category 1 Hurricane Ike has emerged from western Cuba into the southeastern Gulf of Mexico. The encounter with land over the last couple of days has knocked the storm's maximum winds down to an estimated 75 mph, but the circulation pattern, including the inner core, is intact. A reconnaissance flight is currently attempting to refine the estimate.

The storm will be moving over a couple of areas of very high heat content in the Gulf, and the upper air pattern is expected to be very favorable, so the chances that Ike will again be a major hurricane in the next few days are quite high. Two major models are forecasting Ike to be at Category 4 in the central and western Gulf.

Ike is continuing to move west northwest, but at a slower rate of 10 mph. The computer models have been coming into better agreement on Ike's track in the western Gulf. They are taking the storm more to the north than earlier forecasts, and the official track has been adjusted to reflect this. There is still a wide margin of error on the landfall prediction, but the central Texas coast between Corpus Christi and Galveston is looking like the most probable target late Friday or early Saturday.

Video of Ike in Cuba from MSNBC:

Posted by Steve Scolnik at 4:59 PM