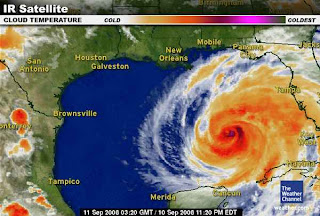 11 pm Update: Reconnaissance measurements show that Hurricane Ike's maximum winds remain at 100 mph, but the pressure continues to drop, indicating that further strengthening is likely. The storm also continues to move more to the northwest than predicted, but a turn to the west northwest is expected overnight. The forecast track has been shifted a little to the north, but this is still a very large storm. The National Hurricane Center says, "Everyone in the hurricane watch area has about the same risk of hurricane conditions."

5 pm Update: Watches and warnings have been issued along the Gulf Coast for Hurricane Ike: Hurricane Ike remains a Category 2 storm with maximum winds of 100 mph. The storm is still moving northwest at 8 mph from a position 720 miles east of Brownsville, Texas.

The recent shift northward in the track means that Ike will miss one of the warm water eddies in the Gulf, but all intensity models are predicting that Ike will become a major hurricane in the next couple of days. The official forecast has been increased slightly to a peak of Category 4 in 48 hours.

The track models are waffling on the strength of the high pressure ridge to the north of the storm, so the forecast track has been shifted a little to the north. The predicted landfall is near the center of the Texas coast, but this is a very large storm, so a wide area of coastline is likely to be affected. Jeff Masters points out in his blog that the shallow Continental Shelf off the Texas coast is susceptible to large storm surges. A storm of this size and expected intensity is capable of generating a storm surge of 10-15 feet for a distance of 100 miles to the north of the center.

Original post:
Hurricane Ike has continued strengthening today and is now a Category 2 storm with maximum winds of 100 mph. It's likely to reach Category 3 within the next 24 hours. Ike is also a large storm; hurricane force winds extend up to 80 miles, and tropical storm force winds up to 205 miles, from the center. The fringes of the circulation reach from the Yucatan Peninsula on the south to northern Florida.

The storm is moving northwest at 8 mph, but a more westward turn is expected. This would put Ike on track for a landfall on the Texas coast late Friday night or early Saturday. At 2 pm, the center was 255 miles west of Key West, Florida and 395 miles south southeast of the mouth of the Mississippi.