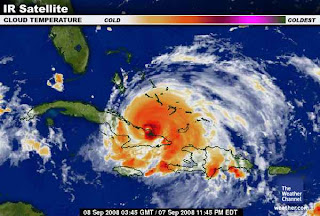 2 am Update: Hurricane Ike is now centered just inland from the Cuban coast. The center is in the province of Las Tunas, 85 miles east of Camaguey. Maximum winds are still 120 mph.

11 pm Update: Hurricane Ike is now on the northern coast of eastern Cuba. At 11 pm, the center was just west of Cabo Lucrecia, or about 135 miles east of Camaguey, Cuba. Maximum winds are still near 120 mph. Ike continues to move toward the west at 13 mph. A west to west northwest track is expected for the next day or two, taking the storm to near western Cuba by Tuesday.

Original post:
Hurricane Ike weakened a little this afternoon as it approached eastern Cuba. Aircraft reconnaissance found maximum winds of 120 mph. This puts the storm at Category 3 on the Saffir-Simpson scale. The strength may vary overnight, but Ike is expected to reach Cuba as a major hurricane. Some weakening will occur as the storm moves over eastern and central Cuba for 24 to 36 hours, but the amount of weakening will depend on how much time the center spends over land. Restrengthening is then likely as Ike emerges into the southeastern Gulf of Mexico.

At 5 pm, the center of the storm was located about 75 miles north northeast of Guantanamo, Cuba, and it was moving west at 14 mph.

Hurricane Ike leaves behind significant destruction in the Turks and Caicos Islands, Haiti, and Great Inagua Island. Flooding in Haiti from Ike has raised the known death toll from the four recent storms to 262, but that number is almost certain to rise. A Miami Herald reporter on the scene in the town of Cabaret on the road from Port-au-Prince to Gonaives witnessed "bodies on every street corner." On the Turks and Caicos Islands, 80% of the homes were reported damaged.