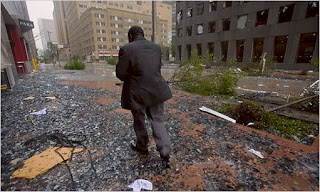 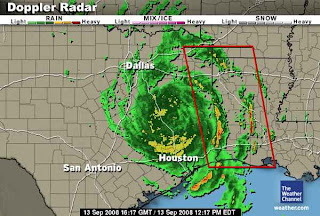 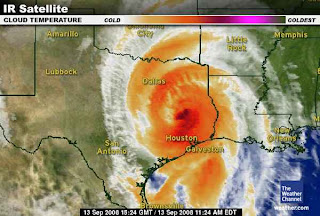 After making landfall at 2:10 am at Galveston, Hurricane Ike is gradually weakening as it moves further inland over Texas. The storm made landfall as a large Category 2 storm, and its effects are being felt far inland. At 10 am CDT, maximum winds were 80 mph, with higher gusts, and the storm is likely to remain a hurricane into Saturday afternoon.

Hurricane Ike caused widspread damage, especially from coastal flooding, across the Galveston/Houston area. Hurricane force winds blasted windows out of Houston high-rise office buildings, and massive power outages affecting virtually the entire metropolitan region left as many as 4 million customers without power. The Houston mayor has appealed for water conservation in response to low pressure in the water system. Preliminary estimates indicate that Ike caused between $8 billion and $18 billion in insured losses.

Hurricane force winds extend up to 45 miles, and tropical storm winds up to 230 miles, from the center. Other effects associated with the storm include very heavy rain and an increased threat of tornadoes.

Ike was centered about 20 miles north northeast of Huntsville, Texas, at 11am, moving north at 16 mph. A turn more toward the northeast and an increase in forward speed should occur tonight and Sunday.

Images (top to bottom): Debris outside the JPMorgan Chase building in Houston from N.Y. Times; Hurricane Ike radar and satellite views from The Weather Channel; Ike track forecast from National Hurricane Center
Posted by Steve Scolnik at 11:50 AM