Official snowfall records in Washington began in 1888.
Posted by Steve Scolnik at 11:00 AM 4 comments: Links to this post 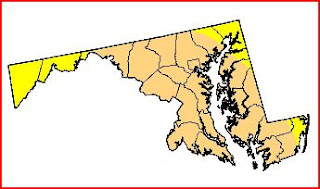 Following the near-record dry February-March, showers in the first week of April have kept the month to date above average for the Washington, DC region. Including 0.77" falling in 24 hours on the 2nd-3rd, Washington National now has a total of 1.1" for the month. In the longer run, however, the region remains in Moderate Drought conditions. The state of Virginia has improved from 27% Moderate to 17% in the current week, but Maryland has worsened from 52% to 79%.

The year-to-date precipitation deficits for major reporting locations in the region have all decreased compared to 2 weeks ago:

The dry conditions extend westward into West Virginia, where Martinsburg is 5.12" low for the year to date.

Images (click to enlarge): 30-day precipitation history for Washington DC from Climate Prediction Center/NCEP/NOAA; Maryland and Virginia drought conditions from U.S. Drought Monitor, USDA and NOAA
Posted by Steve Scolnik at 10:35 AM No comments: Links to this post 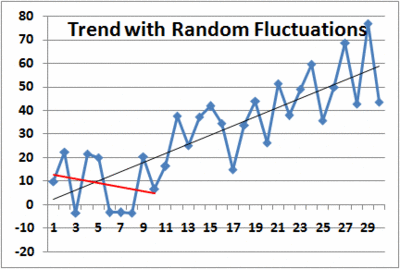 Although it's been shown to be unsupported by the data, the claim that global temperatures have declined since 1998 continues to be high on the climate skeptics' hit parade. This canard reared its disreputable head again last week in George Will's latest bag of climate lies.

Even if this discredited claim were true, it still wouldn't mean anything by itself, since it's a classic case of cherry-picking. Andrew Revkin's April 3 post at the NYT's DotEarth blog picks up on that theme with a discussion of a paper to be published in the American Geophysical Union's peer-reviewed journal Geophysical Research Letters. Despite the clear evidence that out-of-context short-term trends are meaningless at best in the presence of random natural variations, the comments to the post contain many of the typical knee-jerk reactions from the Usual Suspects.

John Mashey, however, suggests a little experiment with the Swiss Army Knife of Data Analysis, Microsoft Excel. The graph at the top of this post shows an example result using Mashey's recipe. The blue line shows a series of 30 points with an overall upward trend (black line). The red line, however, shows the trend of the first 10 points alone. Notice that this trend is downward, and in fact, the value of point 10 is actually less than the value of point 1. For an animated display of a series of such randomly fluctuating trends, click here. In the example, the short-term trend may be much above, much below, or nearly equal to the longer trend, but the overall trend is always upward.

Image: Trend with random fluctuations based on DotEarth comment by John Mashey; graph created using Microsoft Excel and animation from Picasion.com.
Posted by Steve Scolnik at 4:26 PM 3 comments: Links to this post