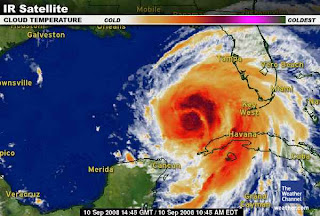 Noon Update: The output from a major global model, known as the GFS, is just now being generated from this morning's data. It shows Ike on track to make landfall on the south-central Texas coast near Corpus Christi Saturday morning (map shown to the right).

11 am Update: Hurricane Ike continues to strengthen. Maximum winds at 11 am are 90 mph. The radius of strong winds has also expanded: 80 miles for hurricane force and 205 miles for tropical storm force. The storm has been moving very little in the last few hours, but it's expected to resume a west northwest course this afternoon.

Original post: Hurricane Ike continues to strengthen over the warm waters of the southeastern Gulf of Mexico. As of 8 am, maximum winds are 85 mph. As a result of friction from the storm's movement over the land mass of Cuba, the momentum of the circulation has been spread over a larger area. Although hurricane force winds extend only 35 miles from the center, tropical storm winds reach as far as 175 miles, and the storm is still affecting western Cuba and the lower Florida Keys. Some recent wind gust reports from Cuba include:
Casablanca Havana 80 mph
Pinar Del Rio 63 mph
La Palma 62 mph

At 8 am, Hurricane Ike was centered 145 miles north of the western tip of Cuba. It was moving northwest at 8 mph, but a west northwest track is likely later on today. The forecast track continues to take the storm across the central and western Gulf of Mexico toward a landfall on the Texas coast. The intensity forecast is more uncertain, but the storm is likely to be a major hurricane at landfall.

Images (top to bottom): GFS model forecast for 8 am Saturday from NCEP/NWS/NOAA, Hurricane Ike satellite view from The Weather Channel, Ike track forecast from National Hurricane Center
Posted by Steve Scolnik at 9:00 AM