The National Weather Service reports that new record low temperatures for October 13 were set this morning at several locations in the New York metro area: The Newark climate history began in 1929. However, the Kennedy, Islip, and Bridgeport records did not begin until 1949, 1986, and 1948, respectively. At Central Park, where records began in 1869, the low of 38° at 6:37 am was well above the record of 33° in 1875.

The NWS also notes that, in the surrounding areas, sub-freezing temperatures ended the growing season in the following counties:
Posted by Steve Scolnik at 6:31 PM No comments: 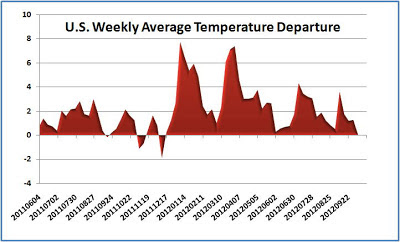 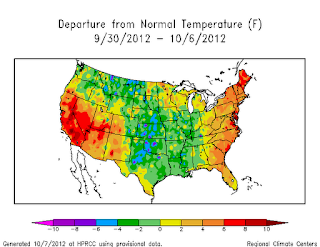 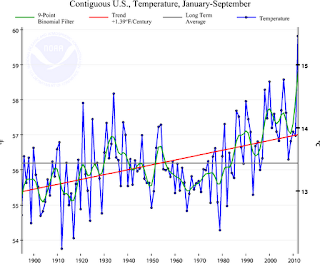 Despite a cold outbreak in the central portion of the country, the U.S. heat streak has extended into its 43rd consecutive week. Preliminary area-adjusted data from the National Climatic Data Center (NCDC) for the week ending October 6, posted overnight, show that the contiguous 48-state average temperature was 0.1° above normal. This was the smallest positive margin since the streak began with the week ending December 17 of last year. In fact, the raw average of 215 major National Weather Service (NWS) stations was 0.3° below normal.

Of the 9 climate regions, 4 were cooler than normal: East North-Central, Central, West North-Central, and South. The South was the coolest at -2.5°. However, the Northeast and West were each 5° or more warmer than average.

Preliminary data for September show that the month averaged 1.8° above normal, vs. 1.2° for August. The fully-adjusted NCDC result for September, posted a few minutes ago, was 1.4° above the 20th century average:

The average contiguous U.S. temperature during September was 67.0°F, 1.4°F above the 20th century average, tying September 1980 as the 23rd warmest such month on record. September 2012 marks the 16th consecutive month with above-average temperatures for the Lower 48.

The warm season of April-September was the warmest on record:

It was also the warmest year-to-date and 12-month period of October-September:

The January-September period was the warmest first nine months of any year on record for the contiguous United States. The national temperature of 59.8°F was 3.8°F above the 20th century average, and 1.2°F above the previous record warm January-September of 2006. During the nine-month period, 46 states had temperatures among their ten warmest, with 25 states being record warm. Only Washington had statewide temperatures near average for the period.

Posted by Steve Scolnik at 10:53 AM No comments: