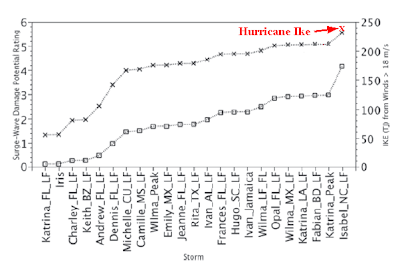 As we've been pointing out here since shortly after Hurricane Ike emerged into the Gulf of Mexico, this is one humungous storm in physical size, if not in intensity. Jeff Masters has a very interesting analysis in his blog this morning of the coincidentally-named IKE (Integrated Kinetic Energy) of Ike. Simply put, this is a measure of the total wind force being generated by the entire storm. On a scale of 0-6 for the potential surge-wave damage rating, Ike gets a value of 5.6 this morning. That reading is higher than any Atlantic storm in the last 40 years. At their peaks, Katrina and Wilma were both 5.1. Ike's IKE value is 50% higher than Katrina's at landfall in Mississippi. If Ike strengthens any further, as forecast, the potential for storm surge damage is very high.

Image from Mark Powell and Timothy Reinhold, via Dr. Jeff Masters' WunderBlog
Posted by Steve Scolnik at 11:50 AM