Windy City Set to Blow Away Century-Plus Heat Record;
Warmest March by Incredible Margin of Over 5° 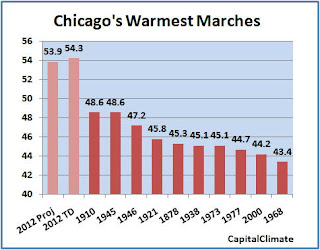 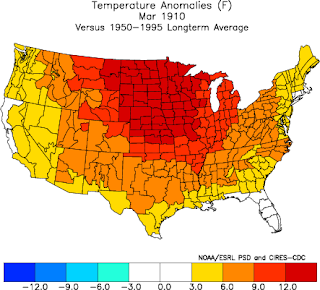 The year 1910 had a very warm March, particularly in the north-central region of U.S. That makes it a perfect target for cherry-pickers to use to imply that the extraordinary record heat of 2012 is not that extreme.

In Chicago, the March record high average temperature of 48.6° has held for over 100 years, although it was tied once in 1945. Through today, the month is averaging 54.3°, which is an incredible 5.7° above the previous record. That's more than the margin between the previous warmest March and the 10th place month in 1968. Even with the more seasonable temperatures forecast through the 31st, this March is likely to average around 53.9°, which is still over 5° above the old record.

Stay tuned for an analysis of record warm temperatures at Minneapolis, where the 1910 average was even more extreme.