Minneapolis: Another 1910 Heat Record About to be Crushed 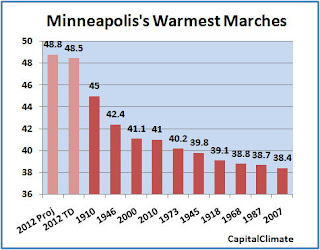 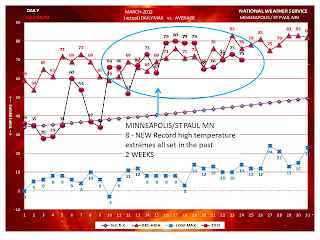 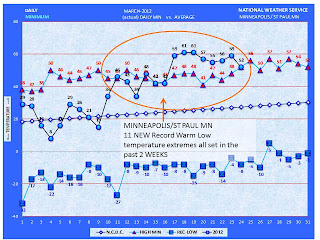 In the previous post, we noted that Chicago is well on its way to smashing the record for warmest March, despite the extreme temperatures which were observed in 1910. Now, let's look at Minneapolis, where the March 1910 heat was even more extreme relative to the long-term average (over 12° above).

Through the preliminary high/low results for today of 53°/40° (9° above average), the monthly average temperature at Minneapolis stands at 48.5°. This is 3.5° above the previous record in 1910. Based on the current forecast of temperatures reaching as high as 71° on Saturday, the 31st, the projected average for the month is another 0.3° higher at 48.8°.

Here are some other noteworthy temperature records set this March at Minneapolis, from the National Weather Service:

- As of March 28th, the maximum temperature in the Twin Cities has reached or exceeded 70 degrees on 8 days, breaking the all time March record of 5 days set in 1910.

- Temperatures in the Twin Cities stayed above the average high temperature for an incredible 13 days in a row, from March 13th through March 25th.