New York on Track For At Least 2nd Warmest March 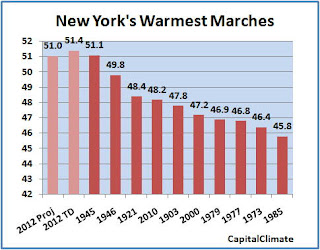 Following an afternoon high of 61°, temperatures at New York's Central Park are dropping below the morning lows this evening, but the March average through today is likely to remain at 51.4°. This is 0.3° above the record warmest March in 1945. With only two days left in the month, cooler temperatures into the weekend will lower the average, but it will still be within striking distance of the record.

The current monthly average to date is 9.4° above the long-term average. There have been only 5 days so far this month with below-average temperatures. Record highs were set or tied on 3 days (old record and date in parentheses): Along with the current 4th place March of just two years ago and the 6th place 2000, 3 out of the last 13 years will be in the top 10 warmest Marches in records dating back 143 years to 1869.