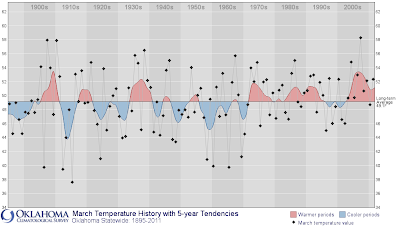 As previously noted, both Chicago and Minneapolis are crushing their records for the warmest March, originally set over a century ago in the remarkable year of 1910. These cities are both near the epicenter of the most extreme temperatures relative to normal this month, but the effects are significant at least as far away as Oklahoma.

The Oklahoma Mesonet points out that the 1910 record for the state average temperature was already broken 5 years ago in 2007, but that record is close to falling, as well:
Posted by Steve Scolnik at 4:54 PM