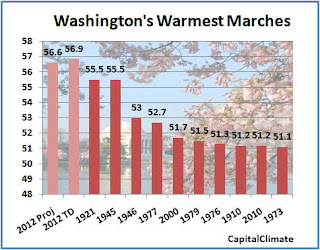 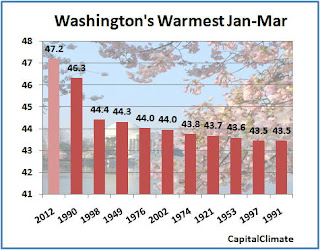 March 28, 6 PM Update: Assuming that this morning's low temperature of 46° holds through midnight, the March average to date remains at 56.9°, but the projection has increased to 56.8°.

Original post:
After a frosty morning low of 34°, Washington's high today of 55° was far below the record for the date of 86° in 1921. Nevertheless, the 1921 record for warmest March which has stood head and shoulders above all other years except for a tie in 1945 is about to be toppled by over 1°. The first below-average day in over 2 weeks knocked almost half a degree off the monthly average to date, but the forecast temperatures through Saturday's end of the month indicate that this March will end up with an average of around 56.6°, which is still 1.1° warmer than the current record.

Exceeding a monthly average record by 1° is impressive enough, but doing it for a 3-month average is even more of an accomplishment. Although there's less than 1° separating the current second warmest first quarter (January-March 1998) from the 10th warmest (1991), the first quarter of 1990 was almost 2° warmer than in 1998, and the projected average for the first 3 months of this year is 0.9° above that. This record warmest first quarter for Washington follows the 3rd warmest winter and the 4th warmest year, including the hottest month ever recorded for the second year in row.