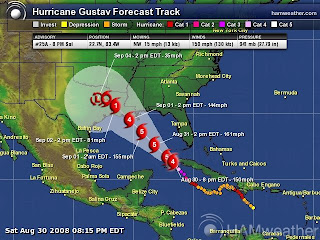 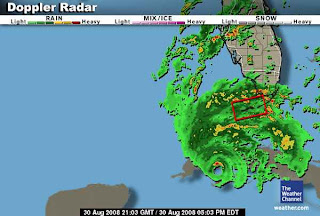 11 pm Update: Hurricane Gustav has emerged into the southeastern Gulf of Mexico after crossing western Cuba. Winds have decreased to 140 mph, but the storm is likely to intensify again over the Gulf. It continues on track to reach the northern Gulf Coast Monday afternoon. The most likely point of landfall is the Louisiana coast west of the Mississippi River.

8 pm Update: At 8 pm, Hurricane Gustav remains an extremely dangerous Category 4 storm as it crosses western Cuba. Maximum winds remain at 150 mph. Some strengthening to Category 5 is possible. The center is located about 65 miles west southwest of Havana, moving northwest at 15 mph. On its current track, it is expected to make landfall on the northern Gulf Coast on Monday as a major hurricane.

5 pm Update: Hurricane Gustav is now a very strong Category 4 storm with maximum winds of 150 mph as it approaches western Cuba. A Hurricane Watch has been issued for a large portion of the northern Gulf Coast, from High Island, Texas eastward to the Alabama/Florida border. A Tropical Storm Watch has also been issued eastward from there along the coast of the Florida panhandle.

The eye of the storm was located about 130 miles east northeast of the western tip of Cuba, and the storm was moving northwest at 15 mph. The latest forecast track brings Gustav a little more quickly to landfall on the northern Gulf Coast. The minimum central pressure reported by aircraft reconnaissance is 942 mb.

Original post:
Aircraft reconnaissance has found that Hurricane Gustav is now an extremely dangerous Category 4 storm with maximum winds of 145 mph. A special advisory issued by the National Hurricane Center at 2 pm locates Gustav just east of the Cuban Isle of Youth and 155 miles east of the western tip of Cuba. An unofficial report showed a sustained wind of 140 mph as the western edge of the eyewall reached the Isle of Youth. Minimum pressure is estimated at 945 mb. Additional strengthening is likely, with the storm possibly reaching Category 5 in the vicinity of western Cuba.