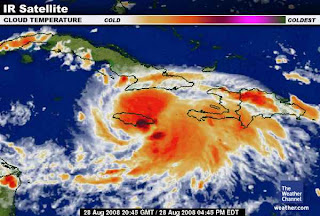 Late PM Update: Gustav is still a strong Tropical Storm as it moves westward along the south side of Jamaica with maximum winds of 70 mph as of 11 pm. There is still wide disagreement among models on the storm's intensity, but it is expected to be a major hurricane as it crosses the Gulf of Mexico.

Hanna has strengthened to 50 mph this evening; it's expected to become a hurricane by Saturday.

8 pm Update: The center of Tropical Storm Gustav is now near the south coast of Jamaica, about 15 miles west of Kingston. Movement is toward the west at 7 mph, and maximum winds are still 70 mph. A Hurricane Warning is now in effect for the Cayman Islands, and the warning for Jamaica remains in effect.

Tropical Storm Gustav continues to bear down on Jamaica late this afternoon after making landfall on the eastern tip of the island around 2 pm. Maximum winds are still at 70 mph. As of 5 pm, the center of Gustav is located only 15 miles east northeast of Kingston. It's moving west around 6 mph.

The storm's expected track has now prompted a Hurricane Watch to be issued for portions of western Cuba. There has been little change in the official track or intensity forecast, but there are large uncertainties in both. The National Hurricane Center says

IT IS SIMPLY IMPOSSIBLE TO DETERMINE EXACTLY WHERE AND WHEN GUSTAV WILL MAKE FINAL LANDFALL. IN FACT...TAKING INTO ACCOUNT THE UNCERTAINTIES IN TRACK...INTENSITY...AND SIZE FORECASTS...THE CHANCES OF HURRICANE-FORCE WINDS WITHIN THE NEXT FIVE DAYS ARE ESSENTIALLY THE SAME AT EACH INDIVIDUAL LOCATION FROM THE FLORIDA PANHANDLE COAST WESTWARD THROUGH THE ENTIRE COASTLINE OF LOUISIANA.

The bottom chart on the right shows that, between Gustav and Hanna, there is at least a 5% chance of tropical storm force winds in the next 5 days along the entire Gulf Coast and along the Atlantic Coast as far north as North Carolina.

This means that interests along the entire western and northern Gulf Coast need to keep a close eye on this storm. The governors of Louisiana and Texas have already issued disaster declarations in order to facilitate storm preparations. The Jamaica Gleaner reports on how Jamaicans are preparing for the storm in their own unique way.

Tropical Storm Hanna continues to maintain minimum strength of 40 mph as it moves west northwest and then northwest away from the northern Leeward Islands.

In the always volatile energy markets today, oil prices dropped and natural gas gave up nearly all of its gains of the last 2 days as it fell over 6% by the close. For a discussion of Gustav's potential impacts on the Gulf of Mexico energy industry and the city of New Orleans, see today's videos from CNBC: Images: Gustav satellite view from The Weather Channel, Gustav forecast track and wind probabilities from National Hurricane Center
Posted by Steve Scolnik at 4:50 PM