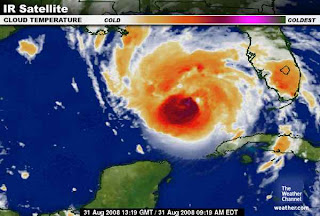 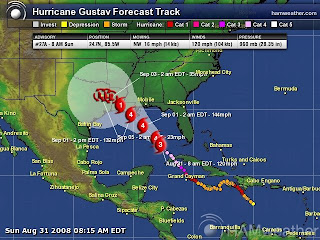 11 am Update: Hurricane Gustav's maximum winds remain at 120 mph as of 11 am. The storm is moving slightly faster, 17 mph, toward the northwest. Satellite images show a more ragged appearance, consistent with the storm's weakening since yesterday. The circulation is also showing the weakening effects of some wind shear. The wind shear is likely to reduce as the storm moves, but it will also be moving over relatively cooler waters. Therefore, some intensification is forecast, but it is likely to be slow to occur. The latest models are showing a westward shift in the landfall point on the Louisiana coast, but the official forecast is not yet reflecting that shift.

Original post:
Hurricane Gustav weakened overnight to a Category 3 storm with maximum winds of 120 mph. It's moving northwest from the southeastern Gulf of Mexico at a speed of 16 mph toward a landfall on the northern Gulf Coast on Monday. The most likely target of the center is southeastern to western Louisiana, but strong winds, heavy rain, and an extremely dangerous storm surge are likely some distance to the east of the center. Storm surges could be as much as 18-25 feet above normal tidal levels near and to the east of the center. A Hurricane Warning is in effect from Cameron, Louisiana eastward to the Alabama/Florida border, including New Orleans and Lake Pontchartrain.

Images: Gustav satellite view from The Weather Channel (upper), Gustav track from HAMweather (lower)
Posted by Steve Scolnik at 9:15 AM