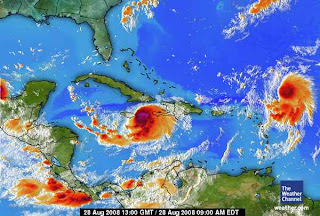 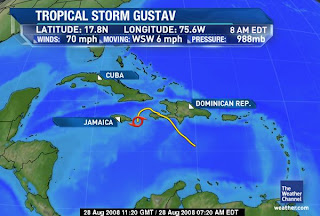 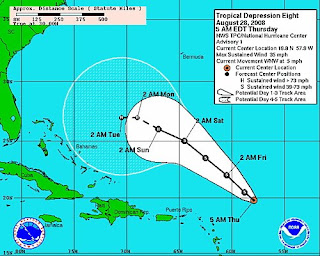 9:30 am Update: Tropical Depression 8 (Tropical Storm Hanna wannabe) is looking much more impressive on satellite imagery (shown to the right) in the last couple of hours.

Original post:
Late last evening, one of The Weather Channel meteorologists was saying, "Don't pay attention to that blob to the south, that's not Gustav." The disruption caused by interaction with land can cause tropical cyclones, especially weak ones, to reorganize, and that's essentially what has happened to Gustav. It's looking a lot healthier today after regrouping to the south of its original track. The new course is likely to take it over or even to the south of Jamaica.

After weakening to as low as 45 mph, Tropical Storm Gustav is regaining strength this morning and is now up to 70 mph. The storm is likely to be back to hurricane force later today. Its restrengthening and the more southerly track have prompted a Hurricane Warning to be issued for Jamaica.

At 8 am, the storm was located about 80 miles east of Kingston, Jamaica. It was nearly stationary, but expected to resume a west southwest motion. The official forecast has now moved more to the west, but it still brings Gustav into the Gulf of Mexico as a Category 2 hurricane.

Meanwhile, as the possibility was noted last night, Tropical Depression 8 has formed east of the Leeward Islands. It has the potential to become Tropical Storm Hanna later today. On its current path, it will move well north of the islands, but a turn to the west could possibly threaten the Bahamas or Florida later on.