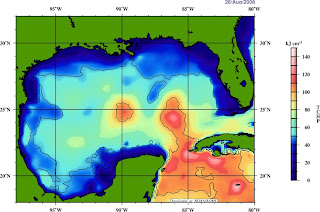 11 pm Update: Hurricane Gustav's maximum winds have increased to 80 mph as it moves through the Cayman Islands. As of 11 pm, the center of Gustav is about 25 miles west southwest of Little Cayman Island, moving northwest at 10 mph. Further strengthening is forecast for the next two days.

Original post:
On the third anniversary of Katrina, Hurricane Gustav is developing into a potential major threat to the northern Gulf Coast. Moving westward from Jamaica over some of the warmest water in the entire Atlantic basin, Gustav has re-intensified to a hurricane this afternoon. At 3:15, it was upgraded to a Category 1 storm with winds up to 75 mph, based on aircraft reconnaissance.

Gustav is expected to continue intensifying, possibly reaching major hurricane status (Category 3) by the time it reaches western Cuba this weekend. One index of intensification is showing a 35% chance of an increase of up to 30 knots in wind speed during the next 24 hours.

At 5 pm, a Tropical Storm Watch was issued for the lower Florida Keys. Various watches and warnings remain in effect for the Cayman Islands, western and central Cuba, and Jamaica.