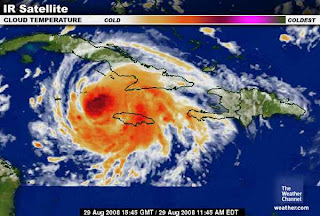 Tropical Storm Gustav weakened slightly overnight from its encounter with Jamaica, but it is now moving away from the island and is expected to strengthen today, possibly rapidly. Maximum winds at 11 am were at 65 mph. The center of the storm was located about 165 miles away from Grand Cayman Island and headed in that direction at 8 mph. A Hurricane Warning has been issued for portions of western Cuba and a Tropical Storm Warning is in effect for central Cuba.

Gustav will be moving over very warm water in the northwestern Caribbean under favorable upper level conditions, so it is very likely to become a hurricane some time today. It could even become a major hurricane by the time it reaches western Cuba. One intensity model gives a 28% chance of an increase in strength of 30 knots or more in the next 24 hours. There is still wide disagreement among models on the final landfall point, so all interests in the northern Gulf of Mexico should remain alert.

Tropical Storm Hanna is somewhat disorganized as it passes north of the Leeward Islands. Maximum winds are 50 mph as of 11 am. Gradual strengthening is likely with the storm possibly becoming a hurricane by the middle of the weekend.