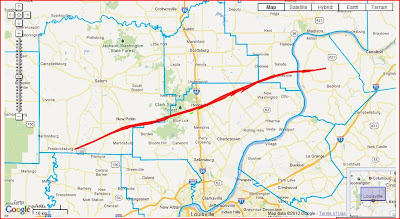 The National Weather Service reports this evening that the March 2 EF-4 tornado in Washington, Jefferson, and Clark counties in Indiana had a total track length of 49 miles with a maximum path width of as much as half a mile. It appears that this storm, although a month earlier, was at least comparable to the only other recorded event of similar magnitude in that region. The infamous outbreak of April 3-4, 1974, the worst in U.S. history up to that point, was the only previous event with F-4 or stronger tornadoes in those 3 counties since official records began in 1950, according to NOAA/NCDC historical data.