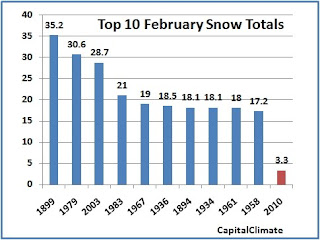 With 3.3" of snow recorded so far this February and a major storm widely expected this weekend, how much would it take to break into the all-time top 10 of Washington February snow totals? Generally, it takes at least one large storm to reach the 17.2" minimum for the top 10.