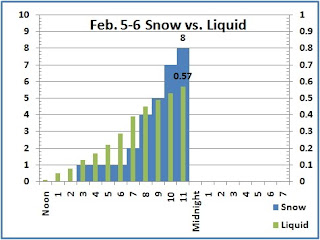 11 PM Update: Colder temperatures and higher snowfall rates have picked up the accumulations significantly since early this evening. National now has 8" on the ground, Dulles has 10" of new snow, for a total of 11" on the ground. Baltimore/BWI has 6".

Original post:
Super Storm!
Armageddon!
Apocalypse!
Wall-to-wall coverage of the checkout lines at Giant supermarket, snow shovel buyers at Strosnider's Hardware and Home Depot. Don't forget the live shot from the salt domes.
Do they have your attention yet?

The much anticipated Blizzard of 2010 is making itself felt in the Washington metro area. In what must be an unprecedented move, the normally-cautious National Weather Service at 12:34 issued a prediction that puts the all-time Washington snowfall record in jeopardy: Snow began falling in the mid to late morning; here in Montgomery County MD it started with some very tiny flakes and a temperature of 37° at 10:40. The pace picked up into early afternoon, but even after several hours of precipitation, the temperature was only down to 34.5°. The above-freezing temperatures kept paved surfaces wet for several hours. Although residential streets are now snow-covered, conditions were not treacherous enough to prevent the UPS man from delivering on time a reinforcing supply of warm Gold Toe Socks.

It's still early into what is shaping up as a major storm, but in much of the metro area, it would have to be rated as underperforming its advertised target of 2-4" this afternoon. As of 4 pm, only Dulles was in the range with 3.4", which was a record for the date, since the old one was a puny 1" in 2001. National was at 1.1", and BWI had only a trace.

We noted here earlier that the major risk to the forecast for a record-breaking event was the liquid vs. frozen precipitation issue, and that is certainly still the case. In the past hour or so, radar indicates that the rain/snow line has advanced northward from Richmond to near Fredericksburg.

The chart shows the accumulated frozen and liquid precipitation at Washington National through 6 pm. The scales are in the ratio of 10:1 of frozen to liquid, so if the green is ahead of the blue, the water content is relatively higher (lower frozen to liquid ratio). Check back for updates as conditions warrant through the storm.

Thanks for this dose of reality. Glad to be the only one not falling for all the hype. Keep up the good work.